An Intimate Wedding in Sedona 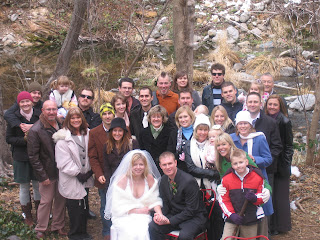 Over the weekend I had the honor of attending a dear friend's destination wedding in Sedona, Arizona. 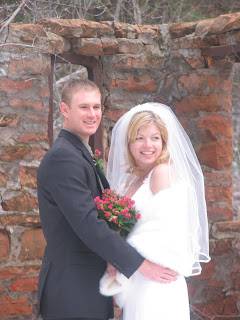 Jenea and Jeff started out as friends but when Jeff joined the military, they began writing to one another. One thing led to another and they fell head over heels in love. Just a few months later they announced they would be getting married. I've known Jenea and her family for more than half my life, so when she called to invite me stating it was "family only" I got a little choked up. 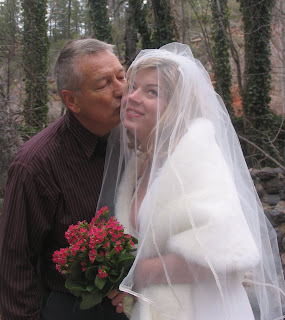 div align="left">Jenea is a 'guy's girl' and is about as low maintenance as they come. She's extremely creative, artistic and is arguably the most kicked back person I've ever met. The ultimate "Anti-Bride" (to steal the phrase from my partner in crime and book author Carolyn Gerin), Jenea only wanted a small gathering with those near and dear to her. Not a fan of pomp and circumstance, she opted to forgo the fancy reception and traditional church ceremony. Instead she sent out emailed directions of where to meet the morning of the wedding in lieu of paper invites (gotta love her taking part in saving the planet). 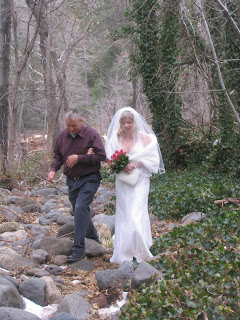 A group of 30 caravaned into Oak Creek Canyon and hiked 1/4 mile into the forest where she and her family had visited for years. The group was led to a spot right off the creek where an old house used to stand. With only parts of it remaining, covered in ivy and surrounded by a dusting of snow, it served as their alter. The grouped hummed "here comes the bride" as she and her dad made their way down an aisle of river rocks and twigs. 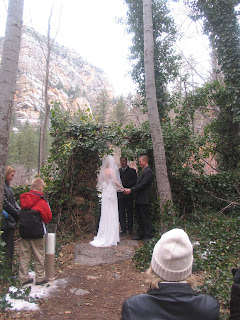 Her brother stood in as the minister (he had been ordained over the internet just for the occasion) and friends video taped and took snap shots of the ceremony. The setting could not have been more perfect, it was a direct reflection of their personalities. The only thing missing was her oldest brother Jason who passed away suddenly last year, but his presence was felt throughout the ceremony. They had a candle lit by his son to signify his presence. 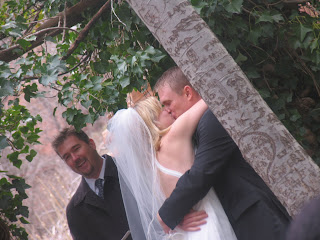 The entire group was moved to tears as they said their own vows (he wrote his down and she "shot from the hip" as she so aptly put it). 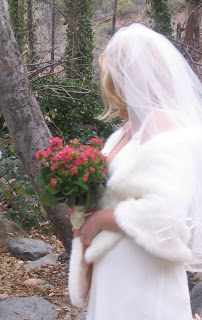 Following the ceremony the caravan headed back towards downtown Sedona for margaritas and Mexican food. Although this was not a typical wedding, you still heard glasses clinking to coax the newlyweds for a kiss and fried ice cream took the place of wedding cake. 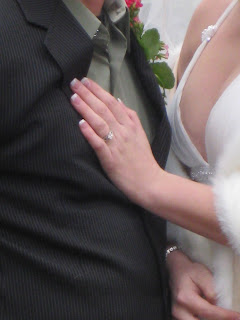 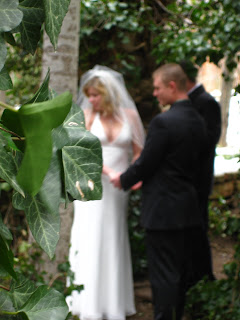 Of all the weddings I've attended or seen through the submissions of readers and photographers over the years, this one was truly special for a few reasons:

- It was what a wedding should be about - two people who love one another coming together in a way that they feel reflects them and no one else.
- It wasn't about saving money, heck it wasn't about money at all - and that was a welcome change to what everyone in this world has been talking about over the past year.
- Everyone who attended, their family, their friends - were very "go with the flow". I hear stories all the time about a best friend or a well meaning family member who intends to help but ends up creating what they want, rather than what the couple wants. From start to finish, it was a reflection of them and no one interfered with that.

I wish Jenea and Jeff the best of luck...they are a truly wonderful couple who are so happy and in love.

Thanks to Jeff for serving his country and protecting us...may God bring you back safely to your beautiful bride. 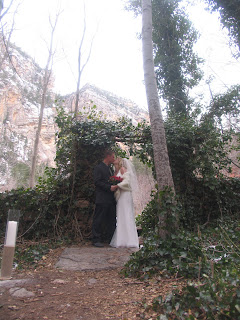