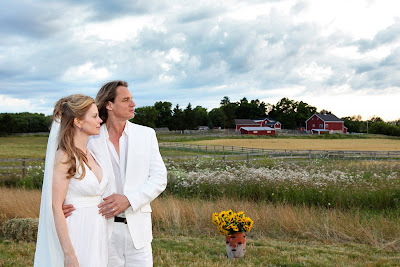 True Blood has become one of my favorite shows on television, so when Kristin Bauer's publicist contacted us about the actress's recent nuptials in Wisconsin, I was overjoyed and couldn't wait to post about it.

Kristin Bauer plays "Pam" on HBO's True Blood series and has popped up on several other shows such as CSI, Bones and even the "Bizarro Jerry" episode of Seinfeld.

She married Abri van Straten (guitarist and vocalist with the South African band The Lemmings) on August 1st on her mother's 45 acre farm in Racine.

Their wedding photos (including the one shown above) were captured by: Ari David Rosenthal. You can see more images by visiting his site. Congrats Kristin & Abri!