Words by Jennifer Stein
Antibride.com and Destination I Do Magazine give Tracy DeNunzio CEO, Recycledbride.com a big virtual hug and shout out for being an outstanding wedding professional, humanitarian, and Bridetide Top 100 Sites to Watch in 2010. Keep up the great, green, work, Tracy – we heart you and everything you do! 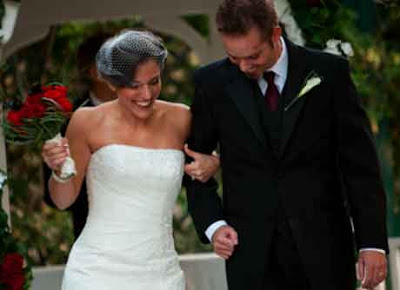 When Maria and Evan got engaged, they never imagined the challenges they would face together before walking down the aisle. They were busy and happily planning their wedding when an unexpected tragedy turned their lives upside down. On April 19th, 2009, Evan went to the grocery store to pick up some cereal and dog food. On the way home, he was in a devastating car accident that split the couple’s Toyota Corolla in half and sent it crashing through a concrete wall. Evan was seriously injured; his neck broken at the C2 vertebrae, a fracture that often results in paralysis or death. 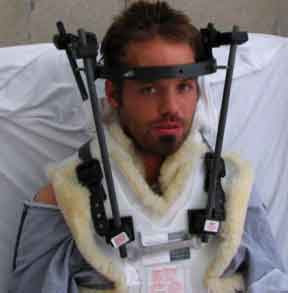 “We didn’t know what would happen to Evan, if he’d ever recover or walk again. I look at the photos from our engagement session, and I’m really glad that we did them early on. If we’d waited, we wouldn’t have had any photos of us from before the accident.”

Evan spent months in the hospital. He wore a variety of immobilizing braces and a halo that was attached to his skull with pins. After multiple complications and a risky surgical procedure, doctors predicted that Evan would make a full recovery — though they couldn’t say how long it would take. The couple didn’t know whether they should cancel their November 21st wedding. Doctors told Evan that he’d be lucky if he could walk down the aisle, let alone dance, by then.

Maria and Evan decided to go ahead with their wedding as planned, and were thrilled when Evan progressed quickly through much of his recovery and was, in fact, able to joyfully walk down aisle. The day became not just a celebration of their love, but an expression of their gratitude to friends and family for seeing them through such a difficult time. All weddings are happy occasions, but Evan and Maria’s felt extra special to everyone who attended and knew how close they’d come to missing out on that day.

All was well, until the couple found out that the majority of Evan’s hospital stay hadn’t been covered by their insurance, and they were hit with staggering medical bills that would wipe out their savings and force them to start their married life deeply in debt. With Evan still out of work recovering, Maria began taking odd jobs while trying to secure a teaching position. With little money coming in and their medical debts looming large, Maria set about finding creative ways to raise money — including listing her gorgeous Maggie Sottero wedding dress for sale on RecycledBride.com.

“At first I didn’t want to part with my dress,” Maria says. “But then I realized that it’s just a thing, and that I was already holding onto the best part of that whole day – Evan! Now I’m glad that someone else will get to enjoy my beautiful wedding dress, and I hope it brings them the same joy that it gave us.”

Maria’s gorgeous Maggie Sottero Vienna wedding dress retails for $1500 plus tax, but she’s selling it for just $1,000. It’s a size 6, in like-new condition, and is a beautiful, figure-flattering design that would make any bride look absolutely stunning. Recycled Bride is going to take care of first-class shipping for the dress, so the buyer will incur no additional costs and is guaranteed to receive the dress quickly and in great condition. Maria plans to use all of the proceeds from the sale to pay Evan’s medical bills.Despite the challenges they’ve faced, Maria and Evan are as happy as two newlyweds could be. They even feel grateful in some ways for all that this experience has taught them. Maria says, “We joke a lot that after this ordeal, the rest of our marriage is going to be a cinch!”

Now they’re just eager to pay off their debt and move forward. “Evan is back to work, but with only one income and trying to save for some kind of future, it will be hard to make things work and recover financially. It’s been a tough 2009. To sell this dress really would be the greatest blessing to start 2010.”

About Recycled Bride
Recycled Bride was created by Tracy DeNunzio to give eco-savvy brides (along with their friends and families) a place to reduce wedding waste and maximize their wedding budgets.

Who uses Recycled Bride?
• Everybody who’s ever been involved in a wedding, or plans to be.
• Newlyweds, former brides and bridesmaids sell their once-worn dresses, shoes, accessories and more.
• Brides who are planning a wedding — along with their bridesmaids, grooms and MOBs — shop Recycled Bride for huge discounts on luxury and designer wedding items.
• Wedding guests go to Recycled Bride for recycled formal attire, and to search the Registry Redux section for great deals on wedding gifts.