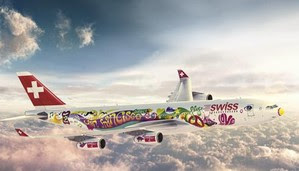 Leave it to intrepid traveler The Cranky Flier our Anti-Bride and Destination I Do Magazine blogger, to know the flight schedule when a new special edition San Francisco airplane graces the horizon. Tomorrow at 4:30 pm PDT, SWISS International Airlines inaugural flight from Zurich to SFO arrives in the International Terminal. To kick off its new Zurich – SFO service, SWISS has created a quirky and colorful special edition San Francisco airplane. This A340-300 is rendered in a wildly graphic and psychedelic 60’s-era inspired mural, complete with peace signs, musical notes and guitars. It’s like a sunny street party on Haight Street at 30,000 feet. According to the Nashville Examiner, the final design was chosen by the readers of the Swiss newspaper 20 Minuten (20 Minutes), a Swiss-German language free daily newspaper. The Summer of Love, indeed! The new SWISS service from SFO-Zurich will run six times a week.

Not only do I get to see one of my favorite bloggers and friends (considered by the Observer to be the 29th most powerful blogger in the world) in my home turf of SF to toast and welcome SWISS properly to fog city, but Cranky will be meeting with Mr. Hohmesiter, CEO, in an exclusive Cranky Flier interview.

Cranky Flier, SFO, SWISS International, and a glass of champagne – all sound reasons to celebrate getting to Europe in super-sonic style – and only a Bart stop away. Bon Voyage!

About Swiss
Swiss International Air Lines (SWISS) serves 73 destinations in 39 countries all over the
world from its Zurich hub and from other Swiss international airports in Geneva and Basel. SWISS operates a 85-aircraft fleet. Switzerland’s national airline embodies traditional Swiss values such as “personal service,” “in-depth quality,” and “typical Swiss hospitality” – aiming to make each and every customer feel at home on our flights.

In the UK & Ireland SWISS operates 33 daily flights from London Heathrow, London City, Birmingham International, Manchester and Dublin to Switzerland and, via its hubs, to the world. SWISS operates more flights daily between the UK and Switzerland than any other carrier and offers passengers the best ticket combinations. SWISS is a member of Europe’s biggest Frequent Flyer Program, Miles&More, and Star Alliance.
Excerpted from press release, SFO
Photo: Nashville Examiner