Antibride in Ireland: Limerick to Lahinch

Words by Courtney Kellar Words by Carolyn, the Antibride
Photos courtesy of Adare and Carolyn

The road has indeed risen to meet me and the properties I’ve been lucky to stay in (and friends we’ve made, food we’ve eaten) have been spectacular. The food and drink are so good, in fact, that it’s a very good thing they don’t keep scales in the room! Operative word about food and drink here: fresh, pure, honest and well presented. What the foodies in San Francisco wax poetic about (and celebrity chefs never stop talking about) is de rigueur over here. As I was told by many a GM: “In Ireland, we don’t talk about the food, we eat it.” Well said and truer words were never spoken! 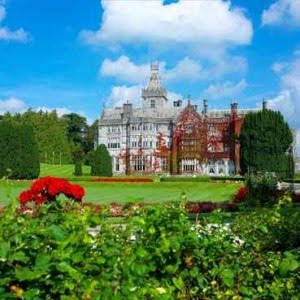 Adare manor is one of the top properties in the world, hosting presidents and world leaders, coining the term “Adare Style” negotiations for informal negotiations between countries. The rooms are classic and Victorian: brocade, intricate woodwork and dark wood. The common areas are lit by candlelight and huge chandeliers and hung with ancient tapestries, casting a majestic spell that is other world. The grounds are an Irish version of Versailles with sculpted gardens in the traditional “Big House” style of the last part of the 1800’s. 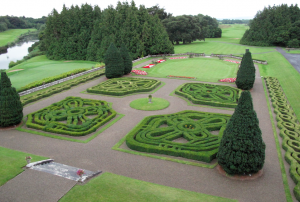 Our room is a Victorian masterpiece overlooking the topiary gardens, gargoyles perched right outside our window. I almost expect aristocrats in corsets and riding gear to come bounding by on horseback! Adare has been voted the 4th best golf resort in North America, the Caribbean & Atlantic, Ireland and Scotland in the highly prestigious Condè Nast Traveler Magazine “Top 100 Golf Resorts 2008 Readers’ Poll”. The romantic bar area, rendered in pink, red velvet, deep mahogany and vaulted ceilings harken to another time. In hushed tones, we recount our day over a Red Breast whiskey. The next day, breakfast is in the stone dining room with vaulted ceilings, a gourmet traditional Irish brekky with puddings, eggs and rashers. Life is good…. 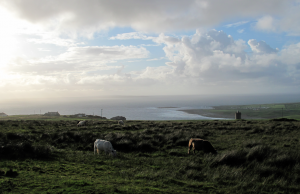 Moving to the coast, we stayed in Lahinch, County Clare where pro surfers such as Fergal Smith shred the icy waves. Vaughan Lodge is a lovely 4-star country town house hotel, owned and operated by Michael Vaughan and his lovely wife Maria. The food is spectacular, fresh and exquisitely prepared. The room was modern and restful with sea breezes blowing in through the windows.

The traditional Irish breakfast (“a fry up”) is a belly buster of trad favorites like black pudding and rashers that will hold you until dinner. Heaven is sitting by the fire in their wood paneled bar and sharing a pint. We went to a trad pub in town, the Claremont, where we were able to listen to spectacular fiddlers and hear a group of old friends from the retirement home up the street sing much loved ballads. We made a wonderful new friend named Amy Flynn, an Irish beauty in voice and demeanor (who doesn’t look a day over 60, although I’ll never reveal a woman’s age), and got hugs all around upon our departure. We met the nicest family of farmers on vacation, the McDermott’s of Galway, who specialize in Ireland’s best potatoes. Michael and Amy, see you in SF!

We took a drive down the coast to Spanish Point in the rain and saw the gorgeous coastline in the intermittent rain and sunshine and got to chase a beautiful rainbow (and possibly a pot of gold). Also, Doonbeg, is a top spot for surfing, according to our new pals at Lahinch Surf Shop.
I’m going to space out the posts on Ireland because there are too many disparate, beautiful and magical places to show you. Thanking Tourism Ireland, slainte!