Words by Courtney Kellar Words and photos courtesy of Carolyn, the Antibride

It’s heady stuff. You are not exactly on the Autoroute de Soleil, Provence-bound, rather you’re driving on winding, two lane roads up the coast. Driving on the left side of the road does take some getting used to, as does seeing a several ton tour bus, hurtling by within inches of your car. After you get used to the idea that these tour operators have been going at it for years, you can stop white knuckling it and enjoy the ride. For pure visual enjoyment, Ireland is a surreal time-warp: it feels like you are wrapped in a dream, or bit players in a historical film. 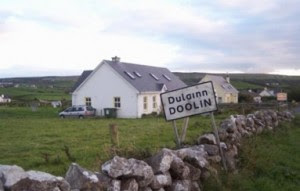 Irish villages are everything you would imagine: charming, and well tended, with window boxes, bright green doors and the quintessential pub (every town has one). The pub serves up food and drink to be sure, but it is also a meeting place for friends and family, best seen at Sunday afternoon ceilidhs.

If you’re lucky enough to catch a real ceilidh in a rural area, you will be rewarded in spades: with locals playing fiddle, tin whistle, accordion, the bodhran, and in some instances: the haunting uilleann pipes (Irelands version of bagpipes).

I already mentioned the Claremont, where we were able to listen to spectacular fiddlers and hear a group of old friends from the retirement home up the street sing ballads that sent chills through my veins. One of the a cappella songstresses was in her late 80’s and explained that the song she sang was an old (and very sad) farewell love song, which I believed to be early Sinn Fein in origin. It reminded me of the Pogues song “Kitty” from the original “Red Roses for Me” album and will stay with me forever. 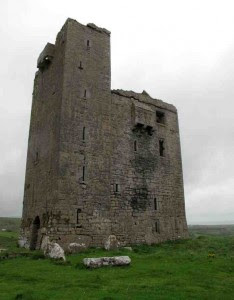 Driving at sunset, amidst a pink and pewter sky casting shadows over the countryside, we stop by Ballinalacken Castle, to meet Declan and his Dad, Mr. Callaghan who bought the castle from the O’Brian clan in 1939. The castle is situated 5 miles from the spa town of Lisdoonvarna, close to the Cliffs of Moher, Aran Islands, Connemara & Galway. We were lucky enough to get a private tour of the 15th Century Castle which looms right beside the Ballinalacken House. The wood paneled bar is a perfect spot for a nice pint before dinner, where fresh and delicious Doolin seafood is brought in daily. The wine list is superb, the dining room lovely, the food top notch. In the Doolin Harbor, you can jump on a boat to the Aran Islands, which harkens back to 1950’s Ireland: retro, rural and very Gaelic (they speak it there).

You can’t go to the beautiful seaside village of Doolin, on the northwest coast of County Clare, without hitting McDermott’s, my favorite pub in town (and in Ireland). I trekked there many moons ago in my back packer days (hiking miles through the farms in Lisdoonvarna). Back then, there was one small grocery store, 3 pubs and one muddy campsite. I was attracted by the bohemian spirit that brought in Dylan Thomas, J.M. Synge, George Bernard Shaw and every musician worth their salt over the decades. 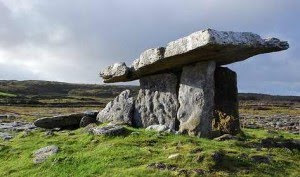 Backpacker Flashback, Doolin: There’s something about being in your 20’s with a backpack, two adventurous German friends, in the rain: but the music makes it all worthwhile. We were foolish enough to camp on the Cliffs of Moher in a rain storm (better than to pay 8 quid for a crowded, rain-drenched camp site!). Fast forward a few years, Doolin has undergone mild growth but did not lose any of its charm.

Beware, it is a tour bus destination, as Doolin is known for its trad music sessions, some of the best in the country, but belly up to the bar, flirt with the Irish barman, (who owns a family farm in the Burren), have him pour you a nice glass of peated Connemara single malt and settle in for a seriously good session. There is live music every night from April til Autumn, and music on the weekends in the winter months. Note: get there early to get a good seat, as the tour bus crowd packs the room shoulder to shoulder. Patsy, the owner is a cute and quirky lass in cats eye glasses who looks like she’s led a fun life (and continues to do so running the best pub in town). We left her with our friends The Hooks new CD, Everything is Golden for her jukebox and headed back to our crib at Vaughan Lodge.

A quick trip to the Cliffs of Moher showcases a sweeping vista of cliffs that drop into a dark and inky ocean, where brave surfers are towed in for sometimes Mavericks-level conditions. The Cliffs are very different than they were 20 years ago, (when I foolishly camped there in a downopour!) with guard rails, gift shops and plenty of tourists, but they are breathtaking and a must see.

Next we are bound for The Burren, or Boireann, meaning “great rock,” a vast, barren, and beautiful landscape up the coast. The R479 winds through rock strewn, rolling hills and made us wonder how our new farmer friend from McDermott’s was able to operate a farm here: it’s as studded with rocks as a Hershey bar is studded with almonds. Desolate and deserted, you can understand why poets, writers and musicians were inspired by such a mystical place, with elements of Druid influence everywhere.

Stay tuned for the road to Galway in our next Travel Tuesday post!
Note: I’m going to space out the posts on Ireland because there are too many disparate, beautiful and magical places to show you, thanking Tourism Ireland. Slainte!