Words by Courtney Kellar Words and photo courtesy of Carolyn, the Anti-Bride

Our long-time contributor and friend Carolyn, AKA the Anti-Bride, has always been someone who is passionate about what she does, takes care of her own and above all - stands up for what she believes in. Well folks, she's done it again. She's recently become a public supporter of the Sea Shepherd Conservation Society and has been instrumental in creating a new iPhone app to bring Sea Shepherd and their supporters together. So, bravo Carolyn for practicing what you preach and not just saying, but doing! Read on Destination I Do'ers to see what you can do to help conserve the world's oceans and wildlife.

Sea Shepherd’s mission to defend ocean wildlife has always impressed me, they don’t talk - they do. Being from Washington, DC and seeing activists picket the White House daily, I always wondered: what exactly are they achieving here? Are there any tangible results? Fast forward a few years, I found myself working with the spectacular Destination I Do Magazine and created the Antibride.com platform and iPhone app with our friends and partners from Synappsis. A story idea about donating to a non-profit for your wedding in lieu of gifts began to take shape… What started as a story pitch/potential wedding donation registry to the rock star Sea Shepherd Media Team March 09, evolved into a full-fledged Sea Shepherd iPhone app that just hit the iTunes Store Tuesday. Synappsis worked tirelessly on code, look and feel, creating features to aggregate community and even donate from your handset. The Sea Shepherd Media Team (with whom I was lucky enough to work with) listened, believed and moved it forward. Today: the Sea Shepherd App is a reality. Big thanks to Traci Walter, Katia Carter, Gus Goodall and Simon Turner for their heads down approach to creating results that don’t happen by carrying a protest sign with a message on it. It has been an honor to work with you all….The Sea Shepherd app is free and available here. Readers, please download, circulate and promote this app to help the Sea Shepherd Conservation Society continue all the good work that they do. The deets: 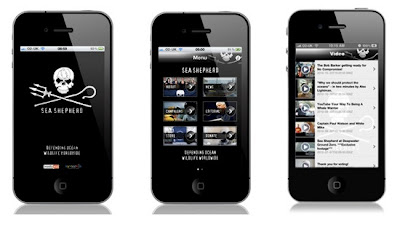 January 11, 2011 – Join ‘Neptune’s Navy’ as Sea Shepherd Conservation Society confronts illegal poachers on the high seas and fights to protect endangered marine wildlife and habitats from extinction. Sea Shepherd remains as an unparalleled, direct action, non-profit marine conservation organization since it was founded in 1977. This new iPhone application allows the world to gain access to their exciting, dangerous and important missions direct from the mobile handset.

The Sea Shepherd iPhone app allows users to stay informed about the organization’s many campaigns including the 2010-11 Antarctic Whale Defense Campaign, Operation No Compromise, to be featured on Animal Planet’s hit television series Whale Wars. Sea Shepherd’s iPhone app delivers international breaking news and updates from founder and President Captain Paul Watson and his crew in the Southern Ocean and other hot spots around the world. If you have ever wanted to be a part of one of the planet’s first effective social media activist applications, now you can. Best of all, it’s free!

• To engage and empower Sea Shepherd supporters who want to learn about the dangers facing our oceans, and the direct action Sea Shepherd is taking to protect them for future generations. As Captain Watson often reminds us, “If the oceans die, then we all die.”
• Increase public awareness of Sea Shepherd and their campaigns by encouraging users to share Sea Shepherd links (and three decades of accomplishments!) with family, friends and iPhone users
• To forge a powerful bond of activism, freedom of information and action which will uphold, strengthen and aggregate this passionate, like-minded community

Media 415 and Synappsis have teamed up to bring forward the best application development, social media and promotional concepts with the Sea Shepherd iPhone Application. Having launched successful platforms such as Antibride.com, Skoold.co.uk, the Sea Shepherd App and the green fashion space, they build powerful tools that serve powerful concepts (and are catalysts for change): Media415.com and Synappsis.co.uk.