Gorgeous Images & Honeymoon Luxury for a Great Cause

Marvelous Marcy: I met her at the Damned show on Valentine’s Day 2010 at Slim’s. I don’t know how I could have missed such a cool and talented gal who lived in the SF Mission District for so long (a tiny hamlet of hipsters). I knew she was a photographer of some renown: she shot legendary bands such as the Damned and even First Lady, Michelle Obama (oh, and did I mention, weddings?). Then we got busy with life and work and lost touch but always wanted to reconnect. She saw a Tweet about my work on the Sea Shepherd App and reached out. Little did I know that she was a lover of animals and was also trying to help save endangered cheetahs. It’s like a match made in heaven: two punk rock aficionados affiliated with the bridal industry finally bond over their work in animal conservation. A little random? Maybe. Very San Francisco? You betcha! I think I’ll send Evan Willams a thank you note, because Twitter, as much as it can drive me mental, has a tangible purpose beyond endless self promotion and marketing – it can bring people together…read on to check out one of the most ‘feel good all over honeymoons’ Cheetah Watch Safari Botswana….Stay tuned for more of Marcy Mendelson’s snaps in future posts! 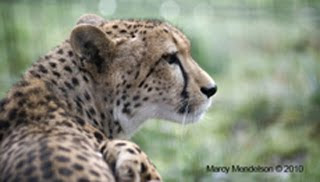 Many couples want to do more than sit on a beach, they want adventure, they want to give back… and they want five star treatment.

I’ve been photographing the weddings and parties of free spirits and artists for many a year. As a recent development, I’ve entered the world of conservation, for the cheetah specifically.

Due to the generosity of planners & eco-lodges in South Africa and Botswana, I’ve been able to arrange a luxury safari focused on the cheetah at a price at a nearly $4k discount. Not only that, a tax-deductable portion goes to Cheetah Conservation Botswana. We will be a small, focused group in beautiful, remote locations known for their wild cheetah!

All my photography work goes toward the production of the cheetah conservation documentary. Special for the Anti-Brides and Destination I Do-ers out there: 15% off photo packages. Mention “Antibride Cheetah” in your request. http://marcymendelson.com

Join me, conservation photographer and National Geographic contributor, and famed safari guide and author, Peter Allison on a unique journey as we explore the best regions in Southern Africa and Botswana to see cheetah in the wild. Luxury accommodations in spectacular settings include all game drives in open vehicles with experienced game rangers on private land that allow off road access and the ability to follow animals at night. This is truly the trip of a lifetime.

About: Marcy is a wedding, event, press & conservation photographer based in San Francisco, California. She has exhibited her work in London, San Francisco and Philadelphia, and recently at Scream Gallery as the recipient of the London Calling prize. As a photojournalist she has shot for The Times of London, documented the classic punk rockers, The Damned, and freelances with SIPA Press as an ongoing contributor with assignments as varied as NYC Fashion Week and the First Lady Michelle Obama.

Her fondness for the cheetah began as a young child reading her parents’ National Geographic magazines and fascinated by PBS nature specials. She was compelled to act when she recently learned about the continued decline in cheetah populations outpacing conservation programs. Special for Antibrides and Destination I Do readers, she is offering 15% off photo packages with mention of “Antibride Cheetah”, and promoting her Cheetah Safari for Conservation.

And if you ask nicely, she’ll teach you how to samba...