This Travel Tuesday we have something really special! This deal is perfect for adventurous destination wedding couples who want to take an out-of-this-world honeymoon. Ever consider spending your post-nuptial time exploring Africa and getting up close and personal with the wildlife? If not, now’s the time to start thinking about it!

The Selous Safari Company is offering amazing deals on sophisticated safari experiences to Tanzania, Africa. There are select options, but these vacations are during high season dates at low season rates. Visit the Selous Safari Camp in the Selous Game Reserve and the Jongomero Camp in the Ruaha National Park during popular peak periods and you can save nearly $1,400 per person. This deal is available on a first-come, first-serve basis and is bookable through many tour operators.

The package includes a seven-night safari vacation in June, September or October. With Aardvark Safaris, the price is $4,998 per person (a savings of $1,400 per person) and includes internal air transfers, accommodation and all meals. You’ll enjoy three nights at the Selous Safari Camp with daily game-drives in open sided 4x4 vehicles and all national park and concession fees. The price does exclude international flights to and from Tanzania. 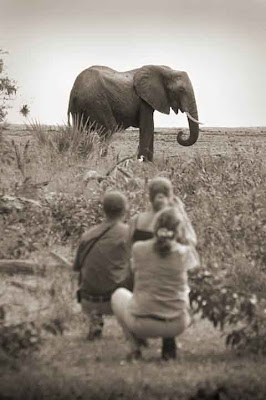 The time restrictions are to your benefit as camps don’t re-open until June because of the rainy season. This is a stunning time to visit Tanzania from June to October because rain is rare, it’s sunny and temperatures remain warm without lots of humidity. Animals are in abundance as they make their way through the parks in search of water. The packages are valid for travel until mid-March 2012.

Selous Safari Camp consists of 13 tents and boasts unbelievable views, privacy and luxury in the heart of the Selous Game Reserve. Luckily for you, Selous is Africa’s largest game reserve and also has the highest concentration of African wildlife. It is home to over a million large animals including half of Tanzania’s elephant population. At Selous Safari Camp, guests aren’t limited to exploring by land. They also benefit from boat safaris on the Rufiji River. This enables you to get up close and personal with the largest crocodile and hippo population in Africa.

Jongomero is the only camp situated in the remote central south-western sector of the Ruaha National Park. This is a gorgeous spot which guarantees unmatched privacy with only eight tents. Ruaha’s greatest perk is in it’s amazing diversity of animals including elephants, huge herds of buffalo, giraffe, zebra, impala, eland, hippo, crocodile, lions and much more. 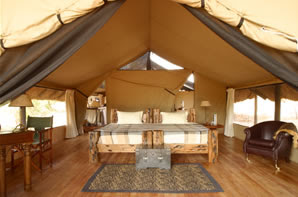 Don’t let the word “tent” fool you. Accommodations at Selous Safari Camp and Jongomero include luxuriously appointed suite tents that are built on raised platforms with thatched roofs. Each comes with a king-sized bed and a private verandah. If you’re a couple who chose to have a destination wedding, then you’re clearly adventurous and up for some fun! This adventure-of-a-lifetime safari might just be the perfect honeymoon package for you.